Social networking sites reach a higher percentage of women than men globally, according to a new study from comScore.

North America Has Strongest Social Networking Reach
Across each global region researched by comScore, social networking reached a higher percentage of women online than men. Social networking’s reach among women is highest in Latin America where it reached 94.1 percent of females online (and the highest reach among males online, 91.9%), and in North America where it reached 91% of females (and the second-highest reach among males, 87.5%). 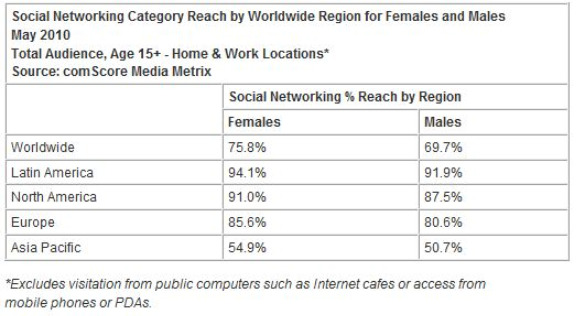 Gays, Lesbians Active Social Network Users
In addition to gender gap, there also appears to be a gap between homosexuals and heterosexuals in social networking, at least in the US, according to a recent Harris Interactive survey.

You need to be a member of Automotive Media Partners, LLC to add comments!